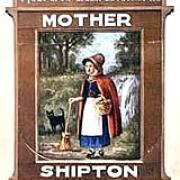 Mother Shipton (circa 1486-1561) was a legendary English witch and soothsayer, known as the Yorkshire Sibyl. She is supposed to have been born at Dropping Well, Knaresborough, Yorkshire, in about the year 1486. No biographical information concerning her is based upon trustworthy sources.
Best Sellers in Musical Instruments, Stage & Studio

An early account of her life says that she was christened Janet Ursula by the abbot of Beverly. Her surname was reportedly Southill. Her mother, Agatha, was reputed to be a witch. An 18th century biographer described her appearance in these words: "Her stature was larger than common, her body crooked, her face frightful, but her understanding extraordinary."

An ancient Scottish chronicle reports that her entrance into the world was attended by "various wonderful presages."

"A raven croaked upon the chimney top; an extraordinary noise was heard about the house for several nights before; and a violent storm of thunder and rain was the immediate precursor of her arrival.

"It was also observed that as soon as she was born, she fell a grinning and laughing, after a jeering manner, and immediately the tempest ceased."

She is supposed to have married a builder named Tony Shipton in 1512, from whom she took the name by which she has been known to posterity. It is said that Mother Shipton died at Clifton, Yorkshire, in 1561. For a number of years prior to 1839, a wax effigy of the Yorkshire Sibyl stood in Westminster Abbey, along with those of other noted persons.

The above is from "The Encyclopedia of Prophecy" by Omar V. Garrison

And now a word, in uncouth rhyme
Of what shall be in future time.

Then upside down the world shall be
And gold found at the root of tree
All England’s sons that plough the land
Shall oft be seen with Book in hand.

The poor shall now great wisdom know
Great houses stand in far-flung vale
All covered o’er with snow and hail.
A carriage without horse will go
Disaster fill the world with woe.

In London, Primrose Hill shall be
In centre hold a Bishop’s See
Around the world men’s thoughts will fly
Quick as the twinkling of an eye.

And water shall great wonders do
How strange. And yet it shall come true.
Through towering hills proud men shall ride
No horse or ass move by his side.

Beneath the water, men shall walk
Shall ride, shall sleep, shall even talk.
And in the air men shall be seen
In white and black and even green.

A great man then, shall come and go
For prophecy declares it so.
In water, iron, then shall float
As easy as a wooden boat
Gold shall be seen in stream and stone
In land that is yet unknown.

And England shall admit a Jew
You think this strange, but it is true
The Jew that once was held in scorn
Shall of a Christian then be born.

A house of glass shall come to pass
In England. But Alas, alas
A war will follow with the work
Where dwells the Pagan and the Turk.

These states will lock in fiercest strife
And seek to take each other’s life.
When North shall thus divide the south
And Eagle build in Lion’s mouth
Then tax and blood and cruel war
Shall come to every humble door.

Three times shall lovely sunny France
Be led to play a bloody dance
Before the people shall be free
Three tyrant rulers shall she see.

Three rulers in succession be
Each springs from different dynasty.
Then when the fiercest strife is done
England and France shall be as one.

The British olive shall next then twine
In marriage with a German vine.
Men walk beneath and over streams
Fulfilled shall be their wondrous dreams.

For in those wondrous far off days
The women shall adopt a craze
To dress like men, and trousers wear
And to cut off their locks of hair.
They’ll ride astride with brazen brow
As witches do on broomstick now.

And roaring monsters with man atop
Does seem to eat the verdant crop
And men shall fly as birds do now
And give away the horse and plough.

There’ll be a sign for all to see
Be sure that it will certain be.
Then love shall die and marriage cease
And nations wane as babes decrease.
And wives shall fondle cats and dogs
And men live much the same as hogs.

In nineteen hundred and twenty six
Build houses light of straw and sticks.
For then shall mighty wars be planned
And fire and sword shall sweep the land.

When pictures seem alive with movements free
When boats like fishes swim beneath the sea,
When men like birds shall scour the sky
Then half the world, deep drenched in blood shall die.

For those who live the century through
In fear and trembling this shall do.
Flee to the mountains and the dens
To bog and forest and wild fens.

For storms will rage and oceans roar
When Gabriel stands on sea and shore
And as he blows his wondrous horn
Old worlds die and new be born.

A fiery Dragon will cross the sky
Six times before this earth shall die
Mankind will tremble and frightened be
For the sixth heralds in this prophecy.

For seven days and seven nights
Man will watch this awesome sight.
The tides will rise beyond their ken
To bite away the shores and then
The mountains will begin to roar
And earthquakes split the plain to shore.

And flooding waters, rushing in
Will flood the lands with such a din
That mankind cowers in muddy fen
And snarls about his fellow men.

He bares his teeth and fights and kills
And secrets food in secret hills
And ugly in his fear, he lies
To kill marauders, thieves and spies.

Man flees in terror from the floods
And kills, and rapes and lies in blood
And spilling blood by mankind’s hands
Will stain and bitter many lands.

And when the Dragon’s tail is gone,
Man forgets, and smiles, and carries on
To apply himself — too late, too late
For mankind has earned deserved fate.

His masked smile — his false grandeur
Will serve the Gods their anger stir.
And they will send the Dragon back
To light the sky — his tail will crack
Upon the earth and rend the earth
And man shall flee, King, Lord, and serf.

But slowly they are routed out
To seek diminishing water spout
And men will die of thirst before
The oceans rise to mount the shore.
And lands will crack and rend anew
You think it strange. It will come true.

And in some far off distant land
Some men — oh such a tiny band
Will have to leave their solid mount
And span the earth, those few to count,
Who survives this (unreadable) and then
Begin the human race again.

But not on land already there
But on ocean beds, stark, dry and bare
Not every soul on Earth will die
As the Dragon’s tail goes sweeping by.

Not every land on earth will sink
But these will wallow in stench and stink
Of rotting bodies of beast and man
Of vegetation crisped on land.

But the land that rises from the sea
Will be dry and clean and soft and free
Of mankind’s dirt and therefore be
The source of man’s new dynasty.

And those that live will ever fear
The Dragons tail for many year
But time erases memory
You think it strange. But it will be.

And before the race is built anew
A silver serpent comes to view
And spew out men of like unknown
To mingle with the earth now grown
Cold from its heat and these men can
Enlighten the minds of future man.

To intermingle and show them how
To live and love and thus endow
The children with the second sight.
A natural thing so that they might
Grow graceful, humble and when they do
The Golden Age will start anew.

These verses were on the outer wrapping of scrolls:

I know I go — I know I’m free
I know that this will come to be.
Secreted this — for this will be
Found by later dynasty.

A dairy maid, a bonny lass
Shall kick this tome as she does pass
And five generations she shall breed
Before one male child does learn to read.

This is then held year by year
Till an iron monster trembling fear
Eats parchment, words and quill and ink
And mankind is given time to think.

And only when this comes to be
Will mankind read this prophecy
But one man’s sweet’s another’s bane
So I shall not have burned in vain.

Following section was kept in a separate jar:

The signs will be there for all to read
When man shall do most heinous deed
Man will ruin kinder lives
By taking them as to their wives.
And murder foul and brutal deed
When man will only think of greed.

And man shall walk as if asleep
He does not look — he many not peep
And iron men the tail shall do
And iron cart and carriage too.

The kings shall false promise make
And talk just for talking’s sake
And nations plan horrific war
The like as never seen before.
And taxes rise and lively down
And nations wear perpetual frown.

Yet greater sign there be to see
As man nears latter century.
Three sleeping mountains gather breath
And spew out mud, and ice and death.
And earthquakes swallow town and town,
In lands as yet to me unknown.

And Christian one fights Christian two
And nations sigh, yet nothing do
And yellow men great power gain
From mighty bear with whom they’ve lain.

These mighty tyrants will fail to do
They fail to split the world in two.
But from their acts a danger bred
An ague — leaving many dead.

And physics find no remedy
For this is worse than leprosy.
Oh many signs for all to see
The truth of this true prophecy.

Tags:
2012illuminatesecrets of the universe

This site uses Akismet to reduce spam. Learn how your comment data is processed.